This spring Microsoft’s Chris Balt asked Paravel to recreate the first version of the Microsoft homepage, originally built in 1994. We initially thought about ‘modernizing’ the page with media queries and other current HTML & CSS, but realized there was far greater value in being faithful to the original, so we were. 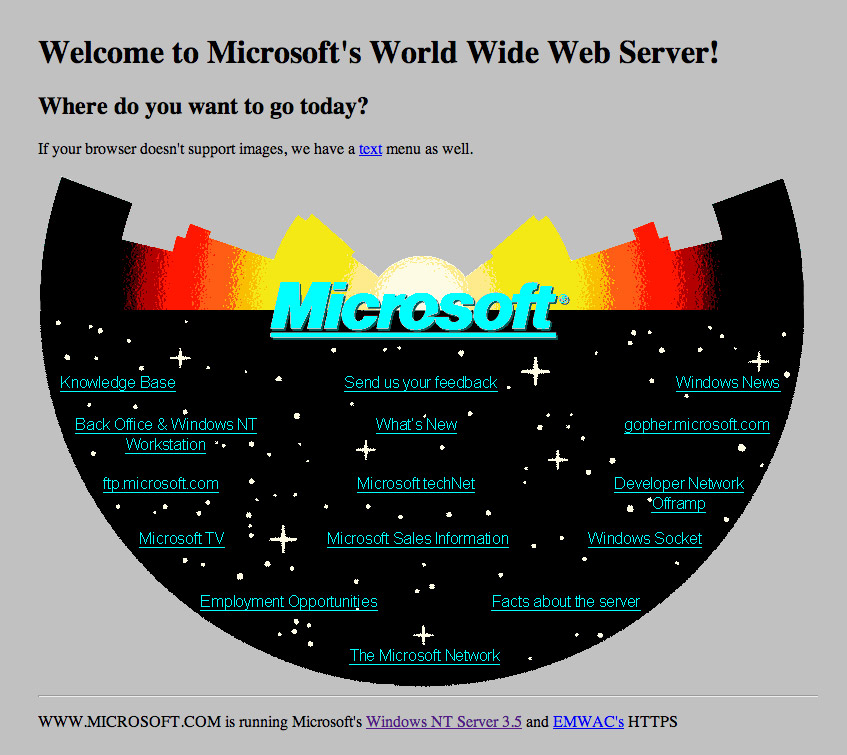 I remember when Benson Chan told us that we’d be working with Microsoft to design the 17th version of their homepage. It set a tone of reverence and respect for all the hard work that came before. But all that hard work—where was it now? I couldn’t help but think, “I wish I could see the other sixteen versions. I wish they were all still live.”

Picking apart the code would be invaluable, even more so accessing a README file that outlined the problems of the day and how they were solved. Similar to the way NASA hosts mission transcripts online, what if we launched sites with README files and pledged to keep them on the web permanently so that future generations of web builders could study them. Take dconstruct.org as an example. It’s archived annually back to 2005. Greg Storey takes this idea further, and I like it:

We need a museum! An institution that can help preserve first-hand accounts of how things were done, what went down in the past. The working files, important emails, formative essays, and forgotten blog posts. We need to preserve the story of how web design began and how it has evolved to today.

I’d love to see such an institution exist. It would certainly need participation from individuals as well as larger organizations. It’d need to be impartial, well-funded, and staffed full-time. I’d kickstart something like this. I’d pay dues or make annual donations to help because I believe that as an industry we could do a better job of documenting our history and progress. Dave Rupert brings up some questions about this institution in his post:

I don’t know what it looks like, who builds it, who curates it, how “archeologists” submit fossils to it, but I’d love to see something like that exist.

Of course I don’t have all the answers, but I do have some thoughts…

The original version of the Microsoft homepage may still be sitting on a hard drive deep within Redmond headquarters, but I think our recreation will serve as a great stand-in until it is unearthed. I applaud Microsoft for making this a priority and hope that other organizations that were instrumental in shaping the web follow suit. There is a lot of value in knowing how the web has evolved. As scrappy as the web was (and still may be) there’s still a wealth of wisdom and ingenuity that has formed the foundation we build upon. We’d be irresponsible not to seek to preserve and understand it, and now is the time to do it. Sites like SpaceJam shouldn’t be the exception, they should be the rule.

Thanks to Dan Schlitzkus for his work on the Star Map graphic!