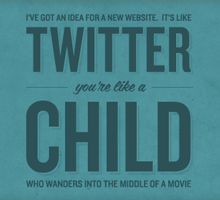 If building a multi-million dollar social media site was easy, I’d be typing this from the deck of my anti-matter powered yacht… in orbit. Just about everyone I know in the web design & development game has fielded an RFP for a social networking site buildout. While sometimes a real budget and scalable plan are at the core, it’s usually someone who’s seen a site like Twitter or YouTube and wants to replicate its success with an astronomically low budget and a ‘build it and they will come’ approach. I thought this all too common scenario was a great topic for Volume 2 of my Quoting Lebowski design series. This time, I’ve borrowed words from the uneven-tempered Walter Sobchak to Theodore ‘Donny’ Kerabatsos.

Feel free to download any of the following resolutions: