My wife and I lived in both Austin and the Houston area during the first few years of our marriage. With hopes of ending the youthful, transient phase of our lives, we packed up shop and moved out to Marble Falls. We swapped skyscrapers for hills, traffic for county roads, and, most relevant to this story, a tightly manicured suburban yard for a field. It became obvious early on that there was more outside our doors than antisocial squirrels and chirping birds.

I learned quickly that nature’s incredible beauty is counter balanced with a fair share of complications and struggles. When you’re blessed with rain, you can expect siren-like cricket chirping every night outside your bedroom window. When seasons change and flowers are in bloom, there’s a good chance you’ll be driven inside to avoid all the sinus-abusing allergens. And finally, while raccoons may be the animal kingdom’s biggest assholes, I’ve now met my most worthy adversary: mice.

It started in the garage…

I started to see mice everywhere. Walking in the garage and flipping on the lights consistently yielded, at best, scurrying noises, and at worst, brief flashes of grey streaking across the baseboards. When they started leaving “solid” signs of their presence I decided to engage in battle. I bought every trap, poison and deterrent I could find. I had no idea how many opponents I had until I started having to empty and reset traps in the garage once or twice a day. I figured I’d eventually claim victory, but when the body count reached 30+ I began to loose hope.

and moved to my car.

After helping my brother move well into the late night hours, I woke up early to meet with a potential client in Austin. Driving down HWY 71 in the pouring rain I sat in my trusty Ford Expedition (of almost 8 years) calmly thinking through my presentation and straightening my tie. All was well until I heard that all too familiar scratching & scurrying noise in the back seat. My heart sunk. My car! I have mice in my car! I was disgusted & crushed that my primary mode of transportation and dear friend had been violated by mice. For the rest of the drive I was panicked, waiting for a mouse to shoot out of the AC vent in attack mode.

Time to bring in the big guns.

This was too much to bear. After the presentation I made it home and vacuumed, 409’d, shampooed, and did the best I could to sterilize the car, though I would never be able to look at it in the same way again. It had to be avenged. I researched various car and home protection solutions and came up with only one fail-safe option. I decided to get some cats. 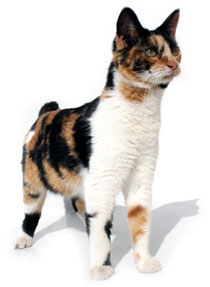 I am allergic to cats and was resistant to the idea of having to take care of and make travel arrangements for pets, but we adopted two anyway. My wife named Maggie after a character in a play about a southern family in crisis, and I named Delia after a Johnny Cash song. The first month was plagued with regular trips to the vet for afflictions ranging from a golf ball-sized abscess to a bee sting that nearly resulted in anaphylactic shock. Almost overnight, things changed for the better. I do not exaggerate when I say the mouse problem was immediately solved. I haven’t seen a mouse anywhere for over 10 months. Well, that isn’t entirely true. I haven’t seen a live mouse anywhere for over 10 months. The girls seem content to live out their days patrolling the grounds and enjoying the occasional chin & tummy rub. A simple food & shelter for dead mice arrangement has blossomed into a beautiful friendship.

I won the battle, but know better than to start a war.

Raccoons have replaced mice as the primary trouble-makers, but the hijacking of the cat food and the dirtying-up of the porch are inconveniences I am willing to live with. Though I’ve been advised to get a dog, I know Mother Nature will only retaliate with something even stronger. Since I don’t know where to find a wooly mammoth, I’m happy to remain in this cease fire for as long as I can.