I’m excited to be releasing a few new tracks over the coming weeks/months.

Hyperlight is going to be the peppy/optimistic album starter. Channeling 8-bit NES Rad Racer vibes, I wanted to go for a carefree-cruise-around-town feel. Enjoy, and thanks for the support!

I’m having a blast hacking together 3D models and experimenting with texture, lighting, and of course, type I’ve been digging. More to come.

Back in August I decided I wanted to make an instrumental synthwave album. As trying as the Summer was for many of us, I did my best to take advantage of all time w/ my 8 & 10-year-old boys. We hiked, swam, watched borderline-appropriate movies, and generally had a blast.

At the house we were leasing, my office was right by the long circle driveway. I could hear them outside all day being awesome: racing bikes, climbing trees, busting rocks, sword fighting, etc.

Their radness set the vibe for the album. We even wrote a brief nine-part sci-fi story that went on to inspire each of the nine tracks. I made each song in order according to the plot and would include the boys in layering in some sound effects and voiceover bits.

I continued doing all the things I love for the album artwork: picking fonts (indulging myself here w/ some ITC Serif Gothic for the title) and making (hacking together) 3D graphics.

I also put together some Spotify Canvas videos—one for each song. Here’s a quick edit showing them all together.

I plan to keep making music. I’ve got a long way to go to gain those 10,000 hours, but I’m having a blast. One day I’d love to find myself making soundtrack music for a show/movie. Heck, maybe my kids will hire me when they get that script we wrote into cinematic production. Anyways, Netflix, give us a shout!

I randomly started making music back in December. At the time, the only place I posted anything was Instagram stories. As short beeps evolved to songs, I built audio.trentwalton.com.

Fast forward to April. When I had 12 songs I was pleased with, I decided to package them up for distribution/streaming. Let this post serve as a mini-release party for Monarch!

Where’d the song/album names come from? The theme for this project was to try and not overthink anything. I’m an amateur here, and while I spend lots of time fussing over details with websites, I didn’t want to do the same with the music.

I rarely edited or revisited songs once they came together, and in Keyser Söze fashion, names came from whatever I saw lying around the office. “Rucco” came from a BOTW Shrine, “Ideals” came from the Ball jar on my desk, and so forth.

The process for the album artwork began with developing a color palette. I assembled some warm tones and played with layer-blending a solid pink/beige block to unify things.

From there, I built some textures by dramatically scaling up image resolution, transferring images to halftone, and then scaling them back down. Gigabytes later, all I had left to do was play with shapes.

I hope you enjoy the beeps. I’ll continue to post MP3s here as they come.

New Fonts on the Ol’ Blog

I’m proud of myself because this is merely a post about new fonts rather than a post about a blog redesign. The perfectly-dialed-in textures and vibe from Phil Coffman’s recent redesign nearly pushed me over the edge, though. Anyways, I did what any sensible designer would do after letting the blog sit for too long: buy fonts!

Titles are set in a variable version of Denso by DSType Foundry who, I’d like to add, were so kind in helping me fine-tune some of the spacing.

I’ve blogged about this before but wanted to post again now that the 4-season series has wrapped. A consistent detail throughout Mr. Robot was that the title cards seemed to capture the essence of the episode instantly. The (freeze) framing of a powerful image + music + the splash of red type across the screen always got me excited for what was in store.

Potential spoilers below, but here’s a video with all four seasons worth of title card intro screens:

The Strokes – At the Door

I adore the high-contrast type, aged color pallette, and sci-fi concept painting here in the artwork for The Strokes’ new song, “At the Door.”

I couldn’t help but track down the title font. I believe it’s Blackbarry NF by Nick Curtis. Then I saw the throwback-Hanna-Barbera-vibed video, which hits even harder. The titles here are set in Angelus Medieval (see also DXAngelus Mediaval).

Sherlock Holmes: A Scandal in Bohemia

~4 years ago, we had a sliver of free time at Paravel, and wanted to experiment with creating an immersive-website-book-thingy for Sherlock Holmes: A Scandal in Bohemia complete with a vibey page design, illustrations, animations, and even audio.

Why did it take so long to share it?

I’m not sure we ever called the experiment done, and we certainly could have spent many more months fretting over all sorts of details. It probably got to a point where the work it’d take to reach the standard we set in our minds far outweighed the joy experienced in the act of creating it. And then we just forgot about it until recently and decided to ship it as-is. Yay!

Yes, there are animations and sounds triggered by scroll (whether or not something is in view). We wanted to play a rain soundtrack when the story mentioned rain. The same goes for fireplace crackling sounds and paper notes sliding into view. Users can still scroll smoothly, and we tried to be extremely subtle about it (which I generally think is the only way to do it).

I knew Dave and Reagan were skeptical about including music and sounds. Still, after some experimentation, I think we found the right balance—ambient tones instead of sharp notes, pulling in looping sounds (like rain) to offset the potential abruptness of a door swinging open, etc.

I also regularly fantasize about being a foley artist and/or making music for TV, movies, or games, so this helped to scratch that itch.

Practicing what I Preach

I’ve been lecturing my kids about the importance of output as it relates to creativity. I’ll say stuff like, “I like hearing about all your ideas, but I love it when you turn those ideas into reality even more.” It’s inspiring to see them create tree house models out of boxes and tissue paper, write spell books, and invent comic heroes.

So I’ll be sharing more of my creative endeavors, whether they’re perfect, imperfect, practical, or frivolous. It feels good to get ideas out—to try things because you feel you need to. More to come!

We updated paravelinc.com! I actually have no idea what version it is (are we counting the flash one I did in 2000?), but rather than trying to overhaul the entire site, we opted to make some key changes and bring the rest along later. So what changed? 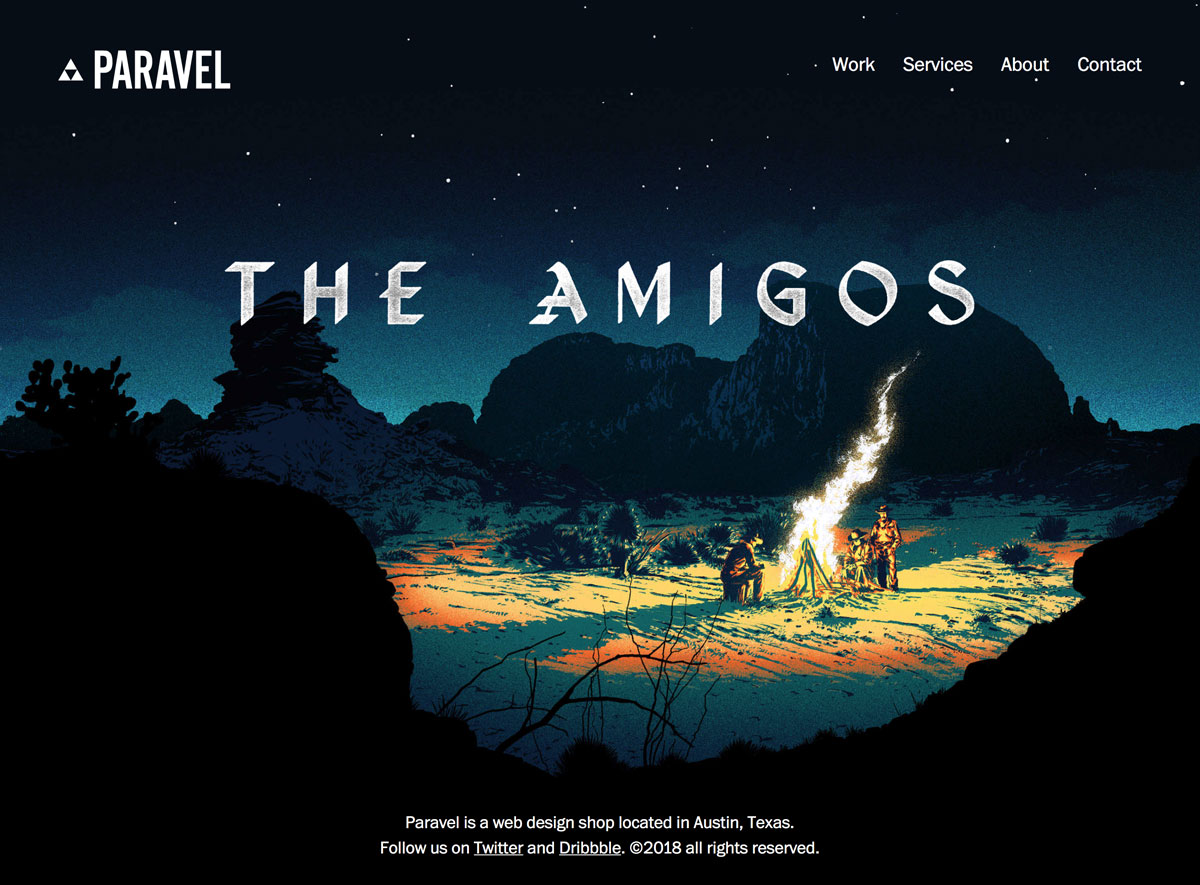 With an insane campfire scene illustration thanks to Matthew Woodson (Bless your Instagram feed while you’re at it), lettering via Reagan, and a subtle-yet-lovely fire glow effect from Dave, we’ve got a whole new vibe.

Kinda. We love Alternate Gothic dearly and use it in our logo and for headlines. When ATF expanded no. 1, no. 2, and no. 3 to 40 different styles (4 widths, 10 weights), I jumped at the chance to utilize a heavier option for headlines on some of the newer pages (coming soon to the rest of the site).

ATF Alternate Gothic Bold and ITC Franklin Gothic are being served via Webtype, who has a stellar support team, BTW.

We’d never had a services page before, but because many recent client relationships involve long-term partnerships instead of one-off projects, we sought to create two pages that explain a couple of our specialties: design systems and prototypes. 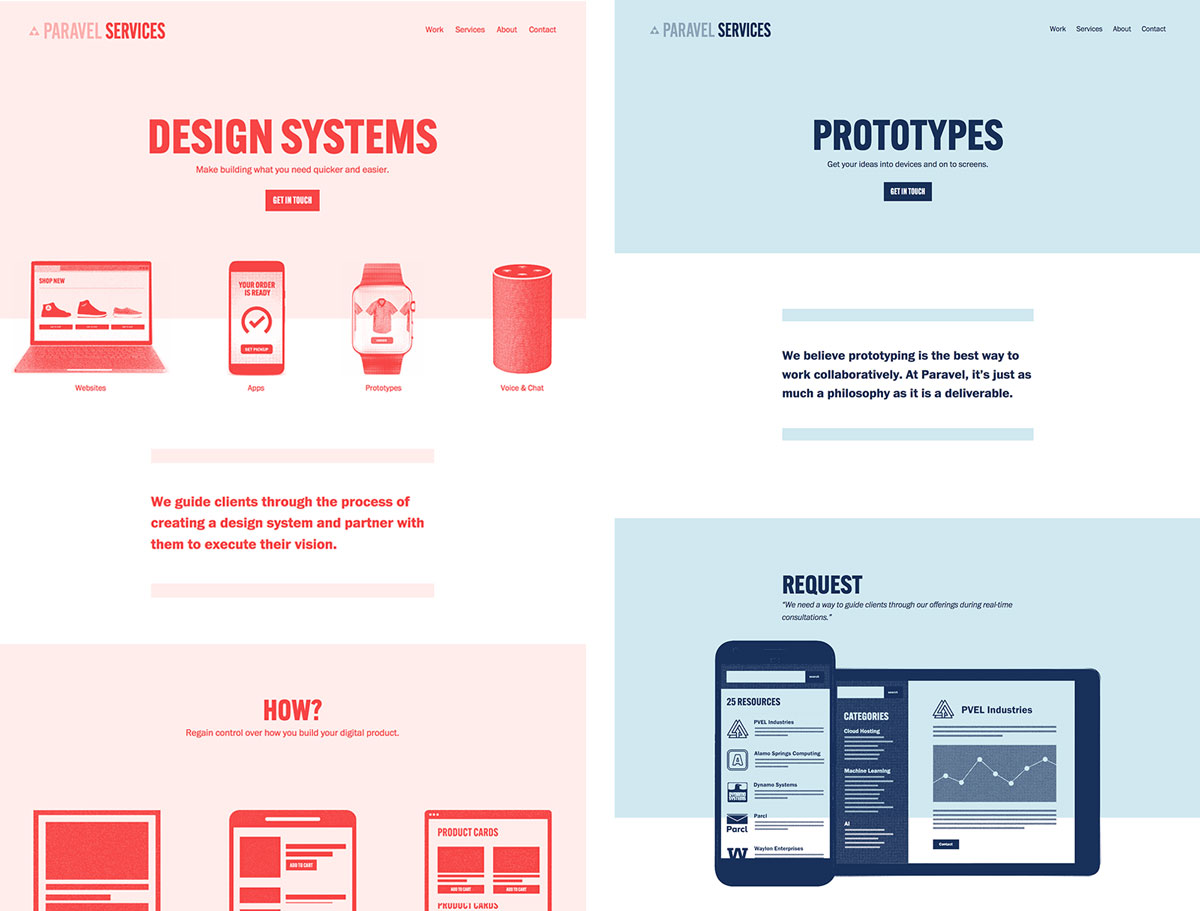 We spent a fair amount of time writing and editing these two pages. Long paragraphs became short paragraphs. Then those became sentences or phrases. Articulating what we do verbally (as well as on the web) isn’t easy, but I like where we landed here. 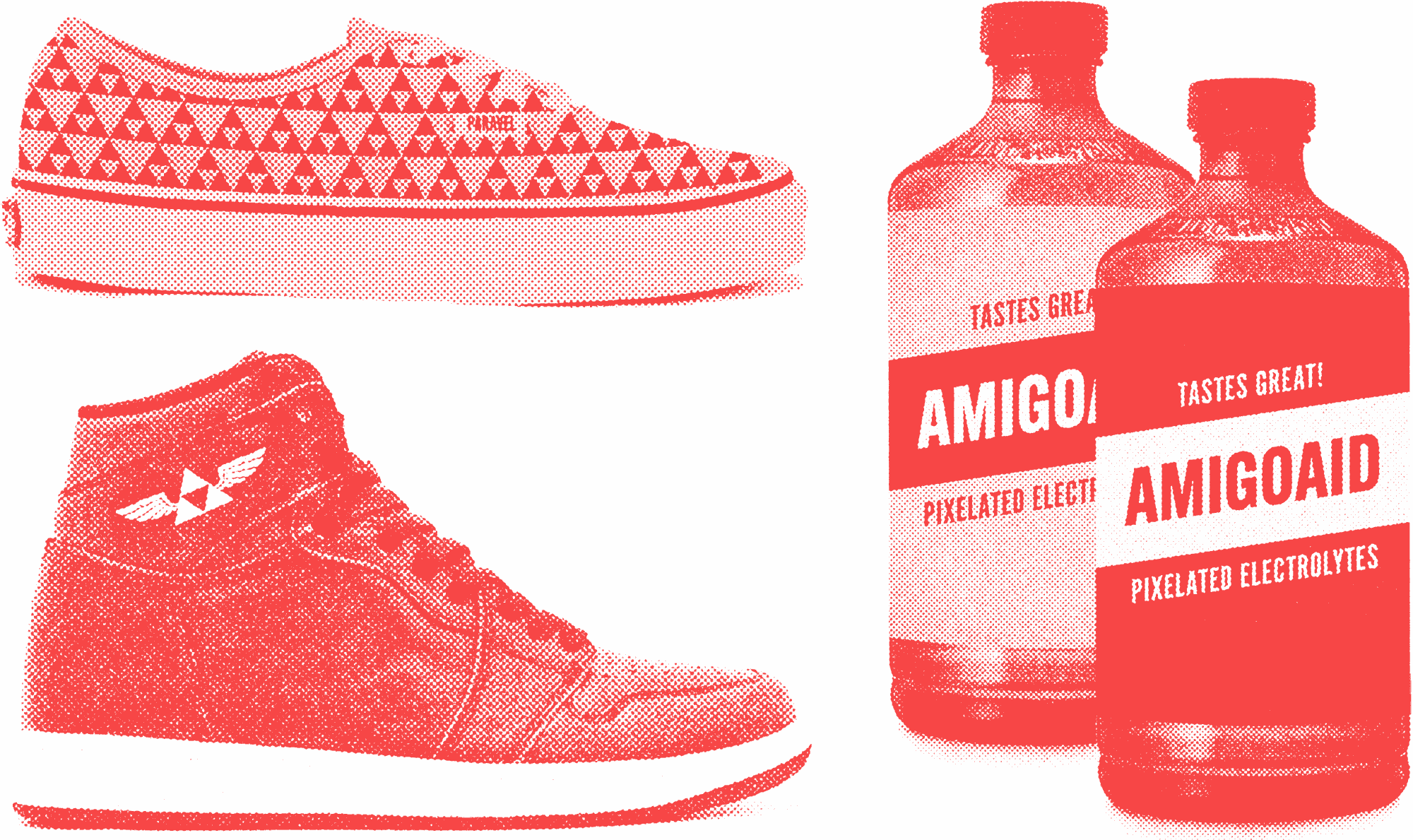 As words were finalized, I got to make graphics—sneaking triforces into Jordan 1s and creating fictitious brands like “Amigoaid.” I haven’t had this much fun making stuff up since I did that New Adventures newspaper.

Paravel is now on Netlify. It’s a Jekyll site on Github, and with minimal configuration, Netlify builds and deploys the site for us. I even used their forms feature to manage our contact form. S/O to Phil Hawksworth for encouraging me to try Netlify this spring at Smashing Conf SF. I love it!

I think that’s it. We’re in our twelfth year at Paravel. Thanks for reading—thanks for your support—just, thanks!

First off, having a visual “map” of requests is compelling even before you begin any analysis. While my site is relatively basic, something like Amazon can be complex, producing a sizable map.

You can dig into the map for further analysis (Harry’s post covers this well), and you can also export as a CSV, which I love because it’s another easy way to itemize third-parties for comparison, sorting, etc.

I don’t think we’ll be doing any performance or third-party consulting at Paravel without utilizing the Request Map Generator, especially now that it’s also included in the webpagetest.org UI.